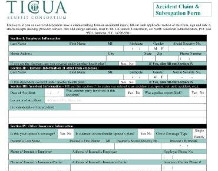 Subrogation claims often arise in the surety context. “Payment of a principal’s debt by a surety is the prototypical situation in which the equitable right to subrogation arises. Subrogation is the right to recover from the debtor-obligor. A surety, e.g., pays the principal debtor’s obligation to the creditor, and in equity is substituted for the creditor, or subrogated to his rights against the debtor.” 11 Witkin, Summary of Cal. Law (9th ed. 1990) Equity, § 169, p. 848.

Under California law, “[t]he prerequisites to the assertion of a right of subrogation are these: “(1) Payment must have been made by the subrogee to protect his own interest. (2) The subrogee must not have acted as a volunteer. (3) The debt paid must be one for which the subrogee was not primarily liable. (4) The entire debt must have been paid. (5) Subrogation must not work any injustice to the rights of others.” Caito v. United California Bank (1978) 20 Cal.3d 694, 704.

Most liability insurance contracts contain one or more clauses specifically addressing subrogation. A typical subrogation clause may provide as follows: “Subrogation. An insured may waive in writing before a loss all rights of recovery against any person. If not waived, we may require an assignment of rights of recovery for a loss to the extent that payment is made by us.” Another common subrogation clause is framed this way: “We may enforce your rights, and the rights of persons entitled to the benefits of this insurance, to recover our payments from anyone liable for the injury. You will do everything necessary to protect those rights for us and to help us enforce them.” Where an express contractual subrogation provision exists, an insurer may recoup its payments directly from the tortfeasor or from the proceeds of the insured’s action against a tortfeasor who injured the insured. Pacific Gas & Electric Co. v. Superior Court (1994) 28 Cal. App. 4th 174, 183.

However, “[i]t is a general equitable principle of insurance law that, absent an agreement to the contrary, an insurance company may not enforce a right to subrogation until the insured has been fully compensated for [his or] her injuries, that is, has been made whole.” Barnes v. Independent Auto. Dealers of California (9th Cir. 1995) 64 F.3d 1389, 1394; see also Sapiano v. Williamsburg Nat. Ins. Co. (1994) 28 Cal.App.4th 533, 536. The insurer is entitled to seek to intervene in the underlying litigation between the insured and the third party in order to protect its subrogation right. In Bank of Orient v. Superior Court (1977) 67 Cal.App.3d 588, for example, the court held a partially subrogated insurer is an indispensable party and must be joined as a party plaintiff under Code of Civil Procedure section 389 (which governs intervention in California state court lawsuits).

While it has been said that “the insurer’s safest course in order to preserve its subrogation rights is to seek intervention in the underlying action” brought by the insured against the legally responsible party (3 Cal. Insurance Law & Practice (1996 rev.) § 35.11[8][d], pp. 35-52.17 to 35-52.19), intervening in an action may have the practical effect of harming the interests of the insured. This is because the defendant has the statutory right to preclude the jury from learning of any insurance coverage that may cover the plaintiff’s loss. If the plaintiff’s insurance carrier intervenes in the action to protect its subrogation right, it will sit at the table with the plaintiff before the jury, who may conclude that (i) the plaintiff already has recovered some or all of its loss from his or her insurance carrier, and (ii) that they are “ganging up” on the defendant, who they may conclude (wrongly) has no insurance coverage, because no insurer representative is sitting at the defense table.